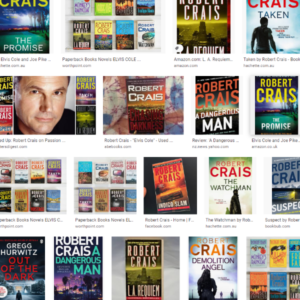 I picked up my first Robert Crais novel, Chasing Darkness (2008) and was immediately hooked.

This book had Joe Pike as the central character. He’s an ex-marine and loves to hunt down the bad guys. (As a superfan of Jack Reacher from Lee Child, the similarities and differences really appealed to me).

Most of the Crais’s books have Elvis Cole as the central character. He’s a private detective, with a effervescent sense of humour.

As for a reading order for Robert Crais books, I propose you do the same as I did. Start somewhere in the middle of the series (I think you’ll really like the books with Pike as the central character), move forward from there and then wrap around to book #1 again.

END_OF_DOCUMENT_TOKEN_TO_BE_REPLACED

When I find a book I like, that's a good sign to me that I'll like everything that the author has written in the past, and will write in the future.

But then I wonder "which of their books should I read next?". It was hard to answer that question.

That's why I created BestReadingOrder.com, so that you can figure out the best reading order for your new favourite author.